The resolution and frame rate of the master format to be produced (and rendered) are both set in the first panel appearing when opening MistikaVR.

There are two types of resolution fields and frame rates that you will see in MistikaVR, which should not be confused:

- The resolution & frame rate of each camera, which is not decided in MistikaVR (it is the one of the source clips). They can be any reslution and aspect ratio. Note that in many camera rigs the cameras are used rotated 90 degrees to provide more vertical range, so the true camera resolution is inverted to what is says.

- The Project Resolution and the Project frame rate.  which are the frame rate and total resolution that you will render out after stitching all the cameras. These are indeed decided by the MistikaVR user, and they can be changed for each Mistika VR session.

This resolution is always forced to 2:1 aspect ratio. This is the standard for VR360. And it is because equirectangular representation must be 2:1 in order to avoid incorrect distortions when mapped to the sphere, and also to produce valid geometry for Stereo3D.

The Project Resolution and Frame rate are shown in the first panel appearing when opening MistikaVR, and once selected it can not be changed until the next session with Mistika VR.

Use the Edit button to change it, like in the image below: MistikaVR offer resolution presets for all known VR Headsets. But if for wathever reason you want to produce a different resolution you can also add a new format. You will be asked the new width, and the height will be calculated automatically (to maintain the  2:1 aspect ratio as per the VR360 standard ) 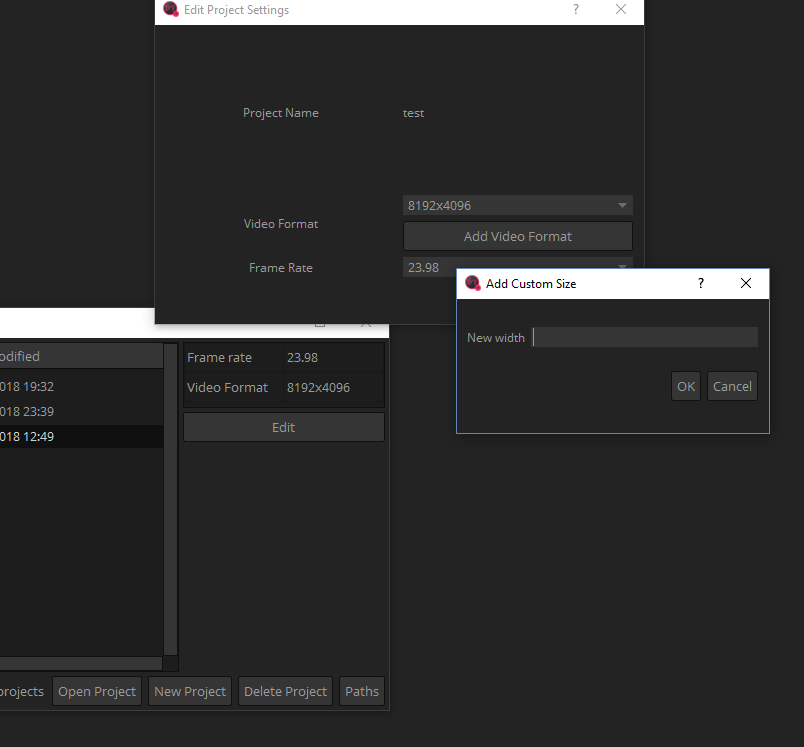 The MistikaVR interface  only offer standard frame rates. But it is still possible to force a non standard fps by changing the settings file directly:

1. Create your project normally, with any resolution and framerate.

3. Navigate to the folder where you keep you projects, inside the project you just created.

4. Edit the file ".VRPresets_YourProjectName" with a text editor

5. Change the line that starts with "MISTIKA_FPS" from whatever number to 80. Save the file

6. When you start MistikaVR again, your project will work at the new specified  frame rate.